One of our favorite activities is to redesign the pieces that have made the history of furniture from a contemporary perspective and more in line with current tastes and habits of life. This year we focused on the console table, one of the most versatile furniture of French origin in history.

We started from an ancient Louis XVI style model kept in our historical archive and we lightened it of the original gold frills to give it a more modern look. We wanted to preserve the original half-moon shape typical of the first consoles in history and emphasize the decorative function of this piece through meticulous attention to detail. 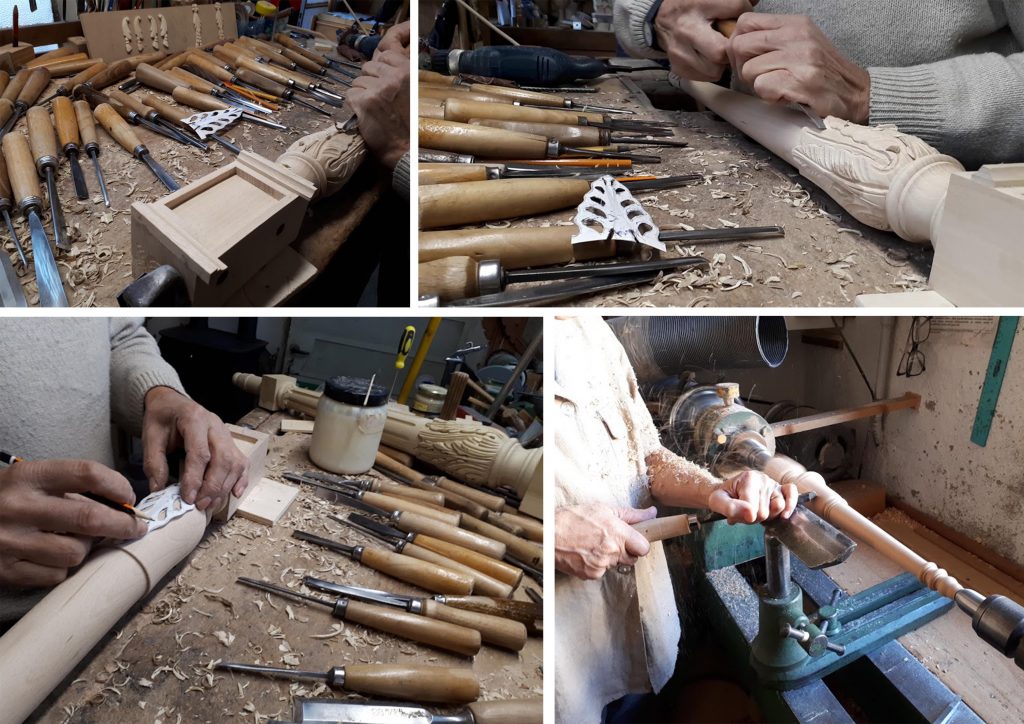 The basic shape of the legs is made by turning. Each single piece takes shape from a solid wood parallelepiped that is engraved and modeled manually with a chisel.The decorations are handcrafted one by one using small templates to draw a trace of the ornament and using chisels of different sizes to create the carved base. The carvings are embellished through the manual application and stripping of gold leaf.

THE TOP
The top, made of wood and not marble as was the case in the 1700s, is entirely hand decorated according to the ancient brush decoration techniques. Refined classic decorations, inspired by nature, develop around a refined fan motif made with different shades of blue and gray.

During latest years Terracotta color is spread all over the world including all categories: from fashion to interior design. It’s one of the most durable trends which continues to be very successful, probably because it lends itself well to different combinations, combining well with warm colors and materials such as wood (for a material effect) but also with cold colors such as grey and blues and materials such as concrete (creating an interesting contrast effect).

Our style office has developed a finishings proposal on this color, mixing it with neutral colors and pale pink with a modern and feminine result. A tone-on-tone combination ideal for those who love to furnish by playing with shades. 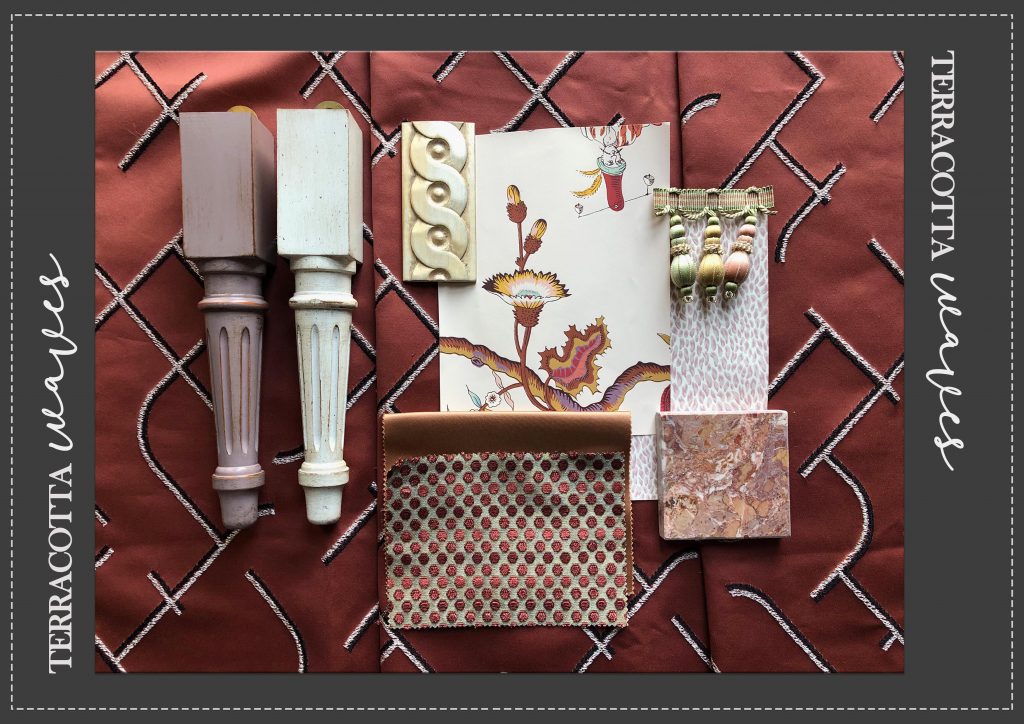 Terracotta is a refined and natural shade that goes very well with light and natural tones. Beige and white are the most suitable tones to give light to terracotta, the ontrend enveloping color that helps to warm interiors and to create refined and elegant atmospheres.

Teal is a rare, assertive, elegant color. It’s not green or blue. It’s teal! It’s the new color that did not exist, and it has replaced black in the world of luxury and exclusiveness. We love teal because it is a versatile color that’s perfect for a classic decor because it goes so well with wood. We also combined it with gold and natural hues such as taupe and beige: fabulous!

During this year we have witnessed a real invasion of “naturalist” colors in furnishings and accessories, colors inspired by landscapes of lakes, forests and woods. These are mostly balanced nuances, of neutral and muted colors, capable of bringing classic refinement to the interior.

Among these new shades, our favourite is mushroom color that can be used nearly everywhere. Although it can also be referred to as “oyster,” “taupe,” or “greige,” mushroom is itself a distinctive color—not too warm, not too cool. The most appealing thing about mushroom is its ability to work in a variety of design styles. Our style office has developed a decor proposal on this color, mixing different style and materials in an elegant set made of warm woods, soft velvets and light blue accents. 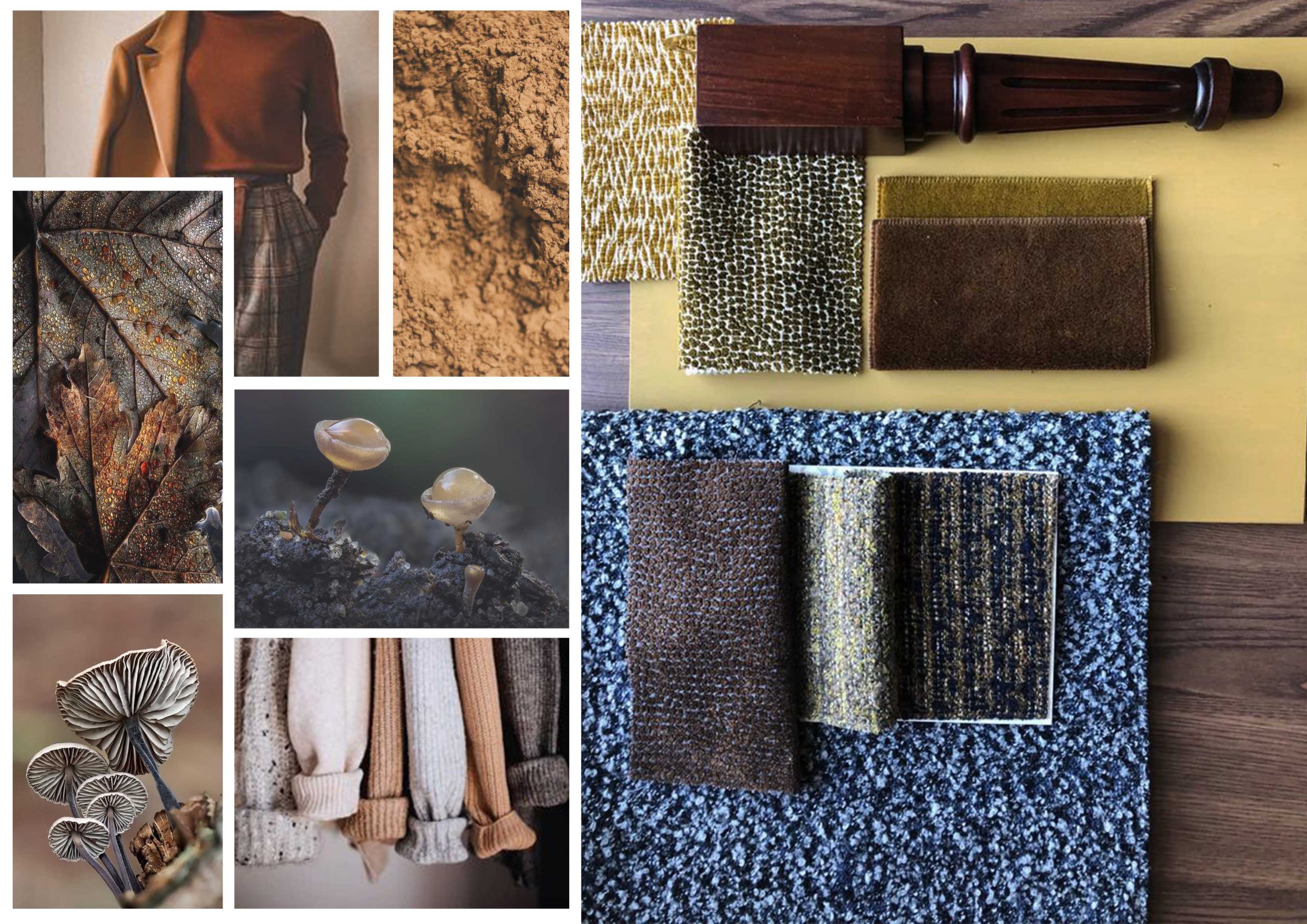 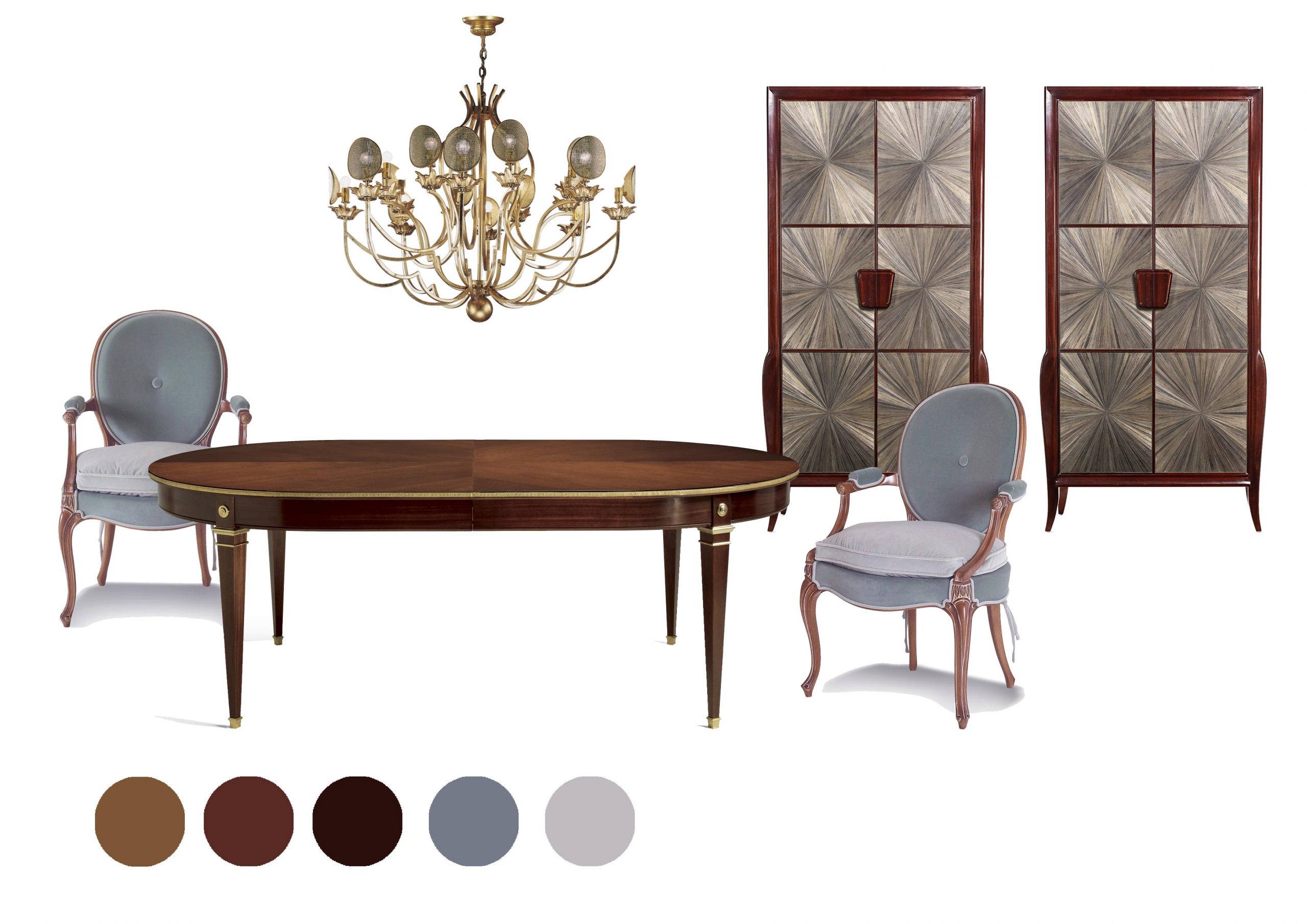 Fashion, design and furniture go hand in hand, exchanging ideas, inspirations, materials and colors. To develop our furnishing proposals, we often take inspiration from the world of fashion in order to offer our customers finishes and fabrics in line with the main trends of the moment. Today we show you the refined textile proposals elaborated by our style office by mixing the fabrics with which we normally work with the extraordinary furnishing fabrics signed by Hermes and the effect of Hermes patterns on some of our models inspired by the early 1900s with hand-made carvings. You will discover that, if mixed artfully, the motifs that have made Hermes scarves famous all over the world can give a unique and classy touch to our homes too! 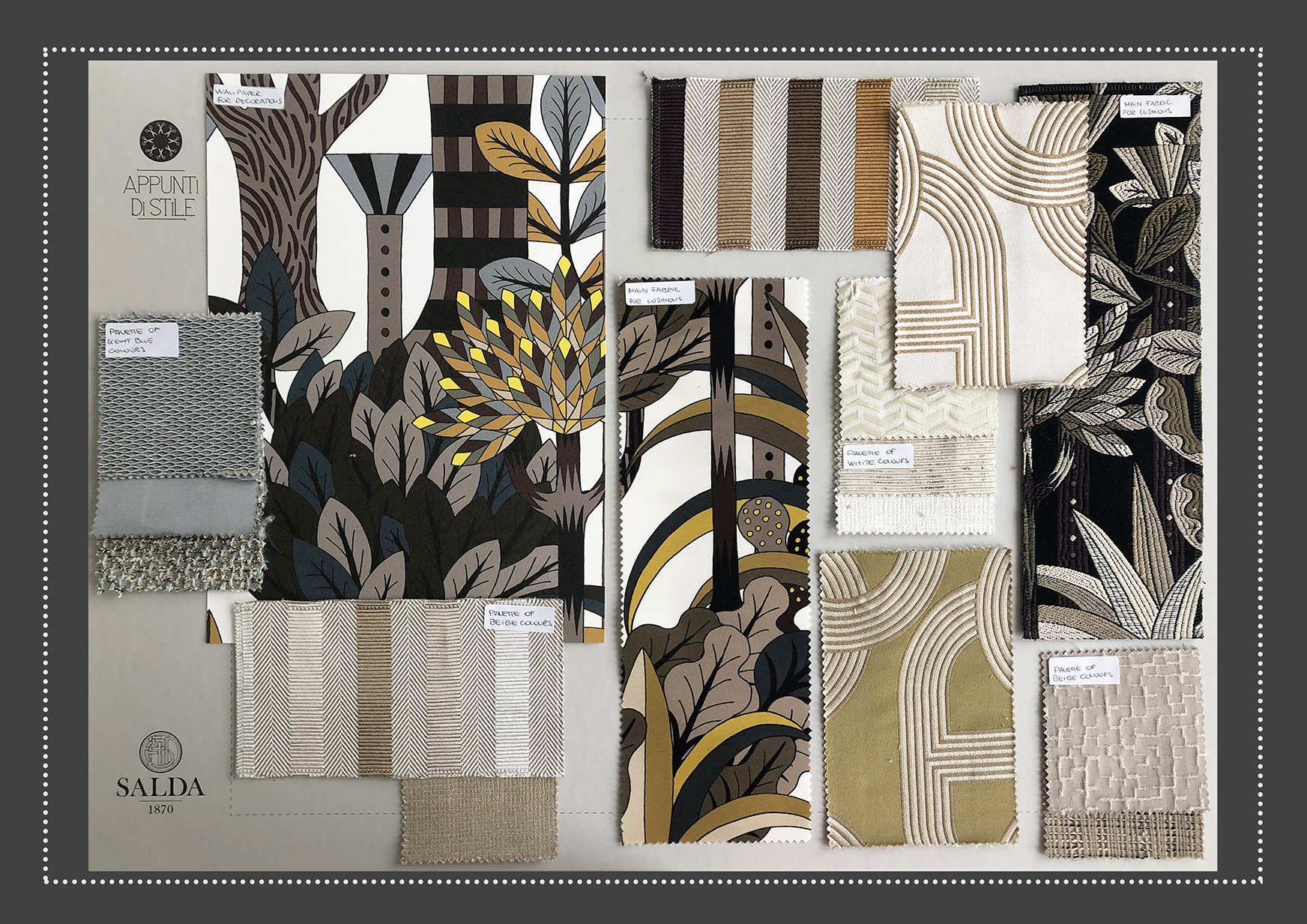 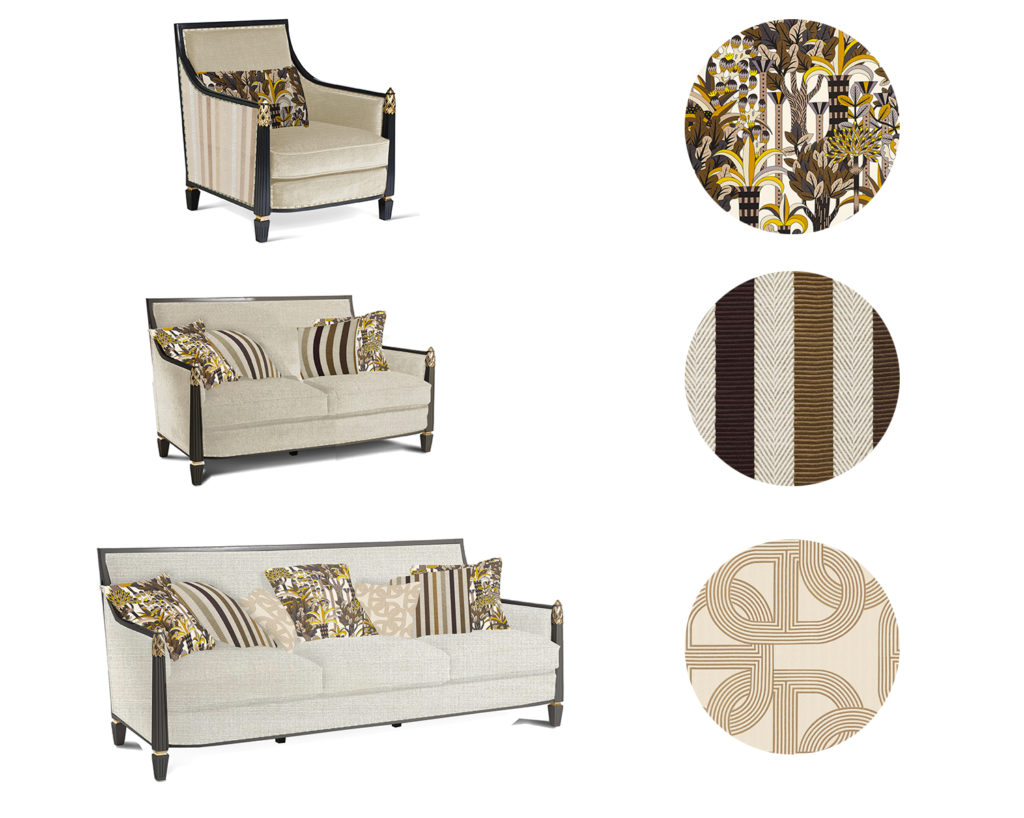 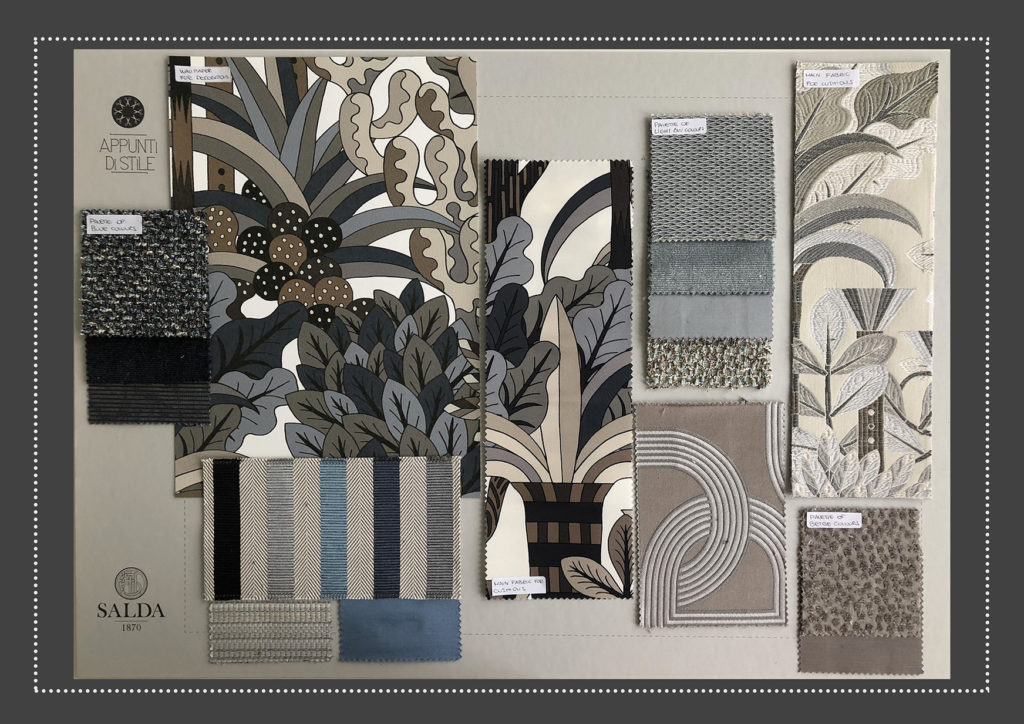 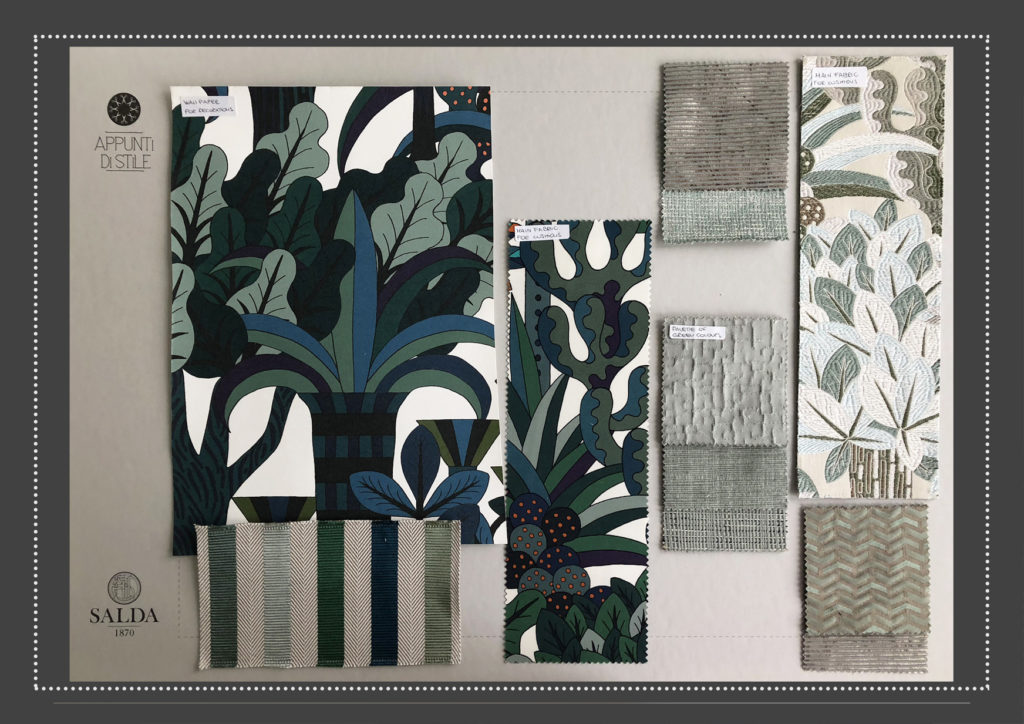 The floral fabrics go very well with the classic style furniture and help to recreate the romantic and elegant atmospheres of the past. We often use floral fabrics in the decor proposals we make to our customers by mixing them with different patterns and plain fabrics of different compositions, our way to create romantic settings with a contemporary flavor. On the board below, for example, we mixed flowers and stripes, two apparently very different motifs which, if balanced well chromatically, give life to very refined settings. 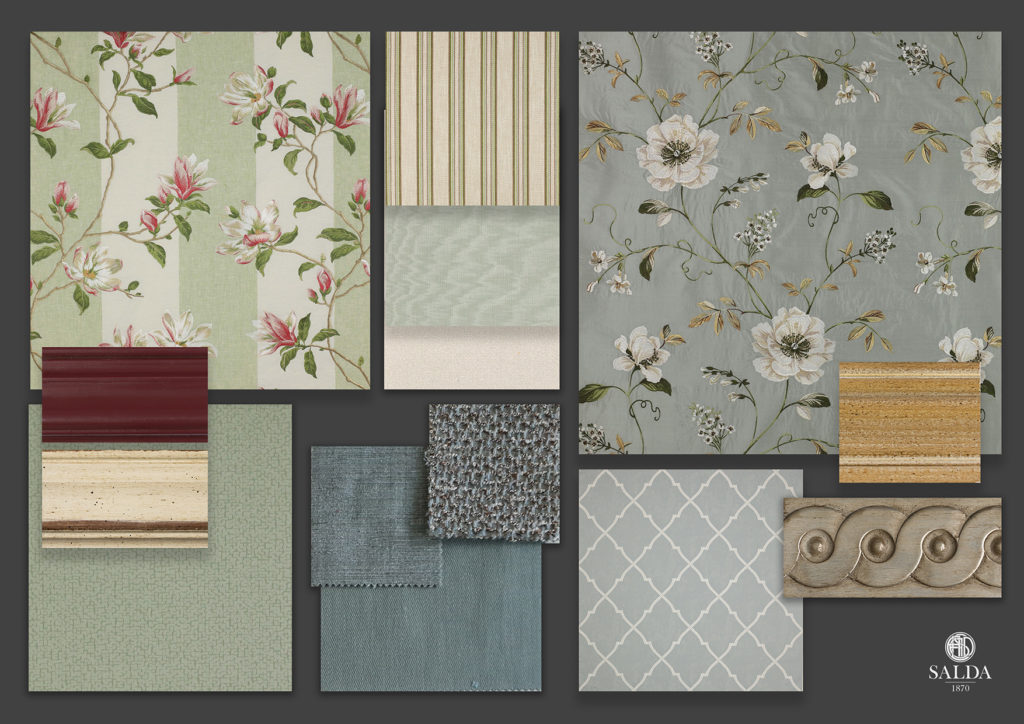 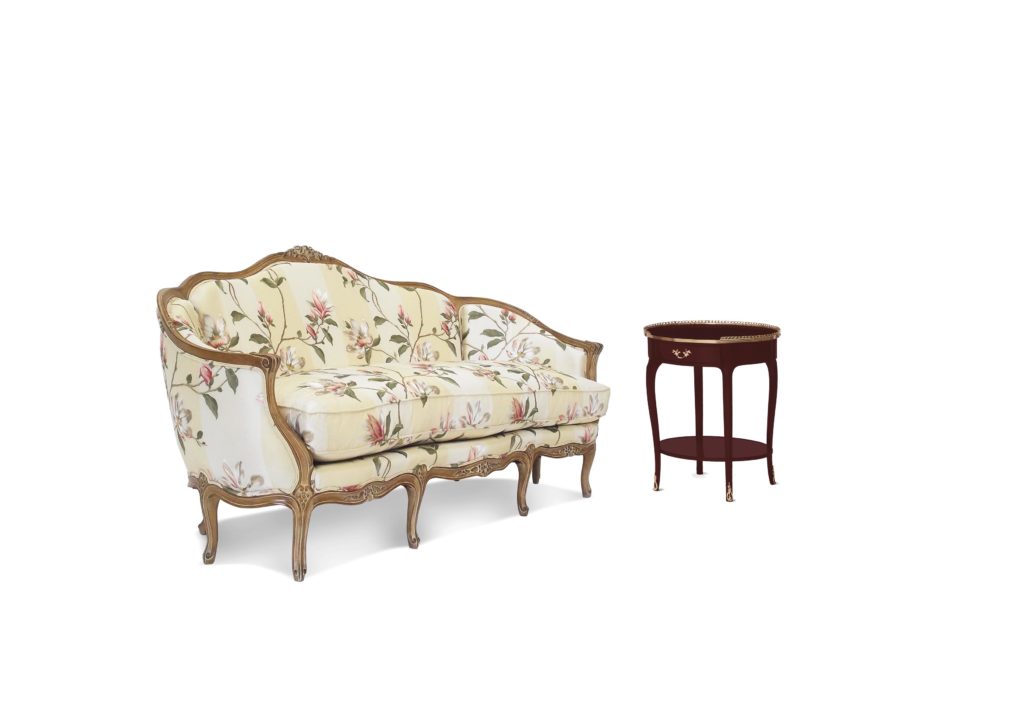 Classic Blue is the color that, according to Pantone Color Institute experts, will better interpret the character of 2020. It is a universal shade “reminiscent of the sky at dusk”, “a boundless blue evocative of the vast and infinite evening sky that encourages us to look beyond the obvious to expand our thinking; challenging us to think more deeply, increase our perspective and open the flow of communication.”

This color appeals to everyone, from lovers of chinoiserie to modernists. Universal as it is, a Classic Blue fits beautifully into timeless settings adding always a touch of sober elegance. For these reason we often use it in our decor proposals, matching it with french lines, handmade carvings and cast brass details.
And a few months ago we started using it also in our decorative experiments for the next Salone del Mobile…stay tuned! 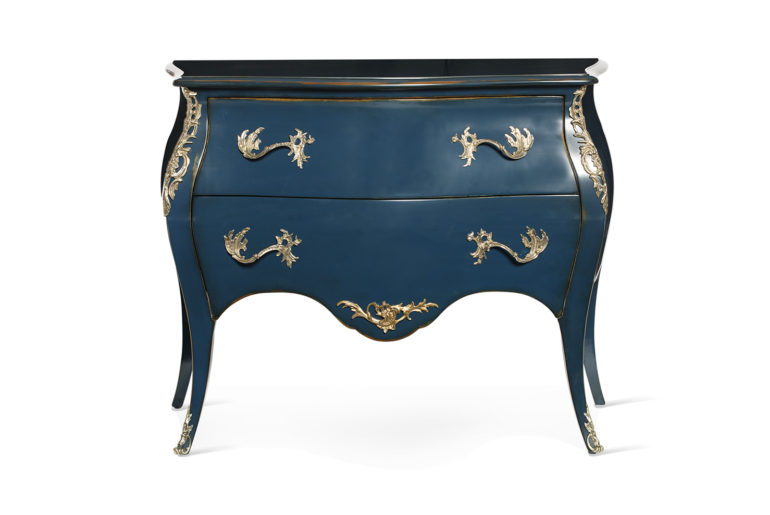 Duck Green is an elegant shade of intense green that is becoming increasingly popular in interior design. Named after the deep green plumage of a mallard, Duck Green is a fashinating hue because it is strong but subdued, perfect for give a sophisticated touch to interiors. Our style office has developed a fabrics proposal on this color, mixing it with neutral colors, black finishings and golden accents. Here is the result… 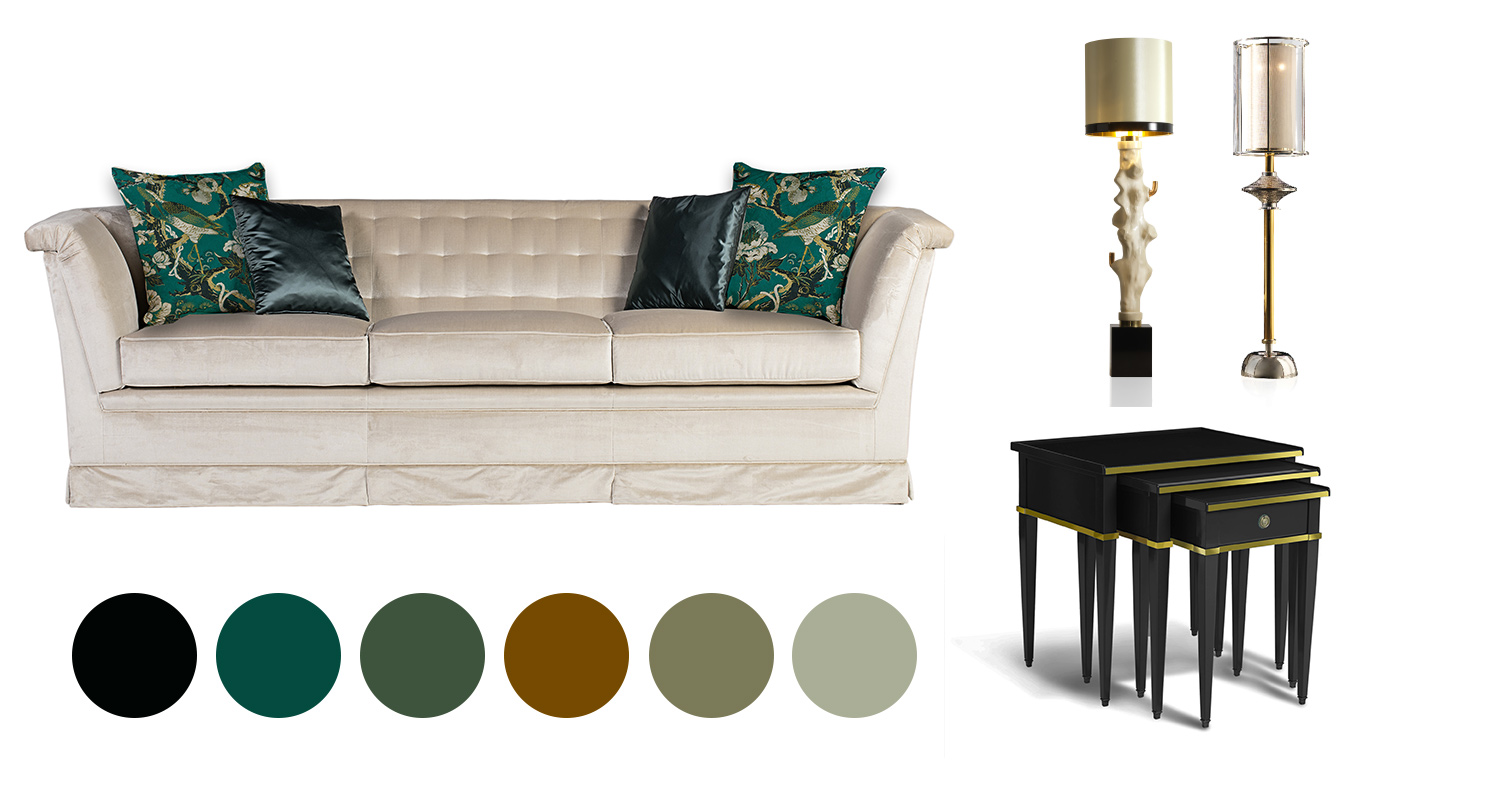 The classic silk damask is a fabric with a warp and weft of identical color, in which, however, the design stands out noticeably from the background by contrast of shine. The final product is enchanting because the fabric becomes two straight ie without the wrong side!

China was the first country to introduce ornamental motifs in fabrics: the Chinese emperor Wendi of the Sui dynasty had owned a damask dress since the fifth century. Over time, damask began to be produced in India, Persia, Syria and Byzantine Greece. Towards the sec. XII, the city of Damascus surpassed all the other countries so much for its beauty and originality of designs, that its silk fabrics were sought everywhere. And, from the heart of the Middle East it was sold in Europe. The West impressed by the high quality and value made it ceremonial, priestly clothes and used it in the furnishing of churches, palaces and royal residences.

Today, with its regal charm, damask is widely used in fashion and in the furnishing of luxury interiors. We like it very much in pastel shades, mixed with fabrics similar in color, but different in texture and composition and combined with golden finishes and shellac.

For many people,  autumn is the most melancholy season of the year. For us, instead, autumn is fantastic and it is a great source of inspiration…

Autumn light is magic: the colors of nature become suggestive, romantic and poignant and create combinations of absolute elegance. Just like the one between brown and light blue to which we were inspired for our new Louis XVI style living room with precious hand-carved details and refined cotton velvet.